UPDATE: The live stream will now start at 8PM PST instead of 5PM PST 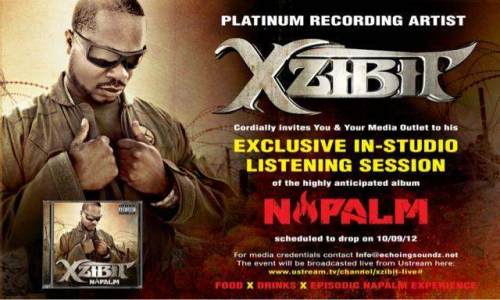 Xzibit fans will be given another chance to hear Xzibit's new album Napalm via live stream from Xzibit's studio at 5PM PDT 21 September 2012! The live stream will be done on Xzibit's UStream channel: http://www.ustream.tv/channel/xzibit-live

The stream will start at 5PM Pacific Daylight Time which is -0700 UTC. If you need to find out what time this will happen in your timezone, go to this World Time Server page which will convert the time to your local time so you can be sure you won't miss the stream!

As previously reported (Xzibit Previews New Album “Napalm” Steamed Live To Fan) Xzibit surprised fans by announcing on Twitter that he would start the stream right away, this time fans will have the chance to stop what they are doing and keep it locked to UStream to hear the album.

Here is what some Xzibit fans had to say about the first stream of the album:

@BRUX_L: Just watched @xzibit streaming his album for the fans live from the studio that album is dope AF!!!

@scoooty27: So @xzibit is basically pre-playing the Napalm album on u-stream right now. It is really dope…

Xzibit fans keep it locked to XzibitCentral.com and we will bring you all the Napalm news in the lead up to the album release October 9 2012!