Xzibit has announced his new album, Napalm, is official due in stores 9 October 2012. Napalm is quickly becoming the most anticipated album of 2012! The official artwork for Napalm can be viewed below: 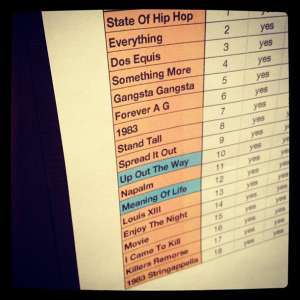 "I started a label called Open Bar Entertainment, being that I gotta take advantage of everything that's happening around me right now, I just feel like [Likwit Crew] never got our fair share in the market place. Whether it was us, whether it was the promotion, whether it was the label…that's not for me to argue about. But what I can do is, since I got my hands around the opportunity, I'll of course, embrace my family members and bring them to the table with me. The first person I signed was King Tee. I also signed Defari and I'm bringing the Golden State Warriors over there. So I'm gonna go ahead and we're going to develop them, and bring them into the circle, putting my family together, coming out correctly." Artists Currently the artists: Xzibit Current Releases Xzibit – Man Vs. Machine (Columbia/Load records/Open bar) Xzibit – Restless (Load records/Open bar) Xzibit Xposed DVD (Open bar/Fortress DVD)