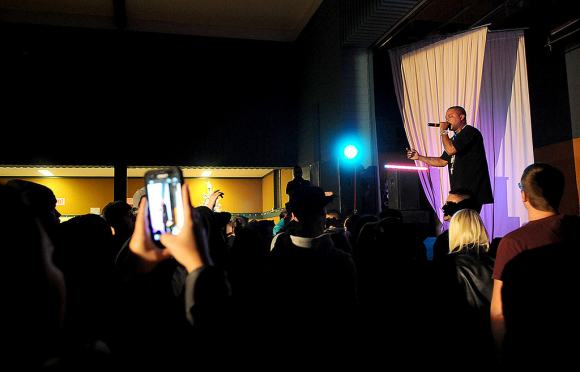 Xzibit performed at Cactus Jack's Night Club on Wednesday November 28 as part of the Canada leg of the Collateral Damage world tour. Below is a review from Kamloops This Week:

When Xzibit walked out onto the stage at Cactus Jack's Night Club on Wednesday night (Nov. 28), I felt like I'd been transported back in time. Granted, it was only about a decade, compared to the 40-plus years of memories for the Beatles' fans who recently watched Macca tear it up in Vancouver. Mr. X to the Z put on a great show. And, despite the fact some of the most memorable moments from my late teens and early 20s are linked to Xzibit songs, I wasn't expecting much.

Not to brag, but I've seen plenty of once-huge rappers play relatively tiny venues. None of them were very good (no offence to Snoop Dogg, Coolio, et al.). Twelve years ago, Xzibit was one of the headliners on the Up In Smoke Tour — a 44-show circuit that played to packed crowds in arenas and stadiums across North America, including what was then GM Place in Vancouver.

Now, here he was at Cactus Jack's, presumably sitting in a small room backstage playing XBox while up-and-coming rapper John Connor warmed up the crowd. But, it seemed Xzibit got it. Judging from my very un-scientific research on Wednesday night's crowd, which involved looking at the people who had assembled at CJ's, it seemed to be split just about down the middle — half in their late 20s or early 30s and there because they loved Xzibit's stuff circa-Y2K, and half closer to 19 and more fans of Pimp My Ride or the "Yo Dawg" meme than Tha Alkaholiks.

I fell into the first category and was not disappointed. Xzibit's set list was largely made up of some of his biggest hits, which is not always the case when big names are promoting new albums in small clubs. There was Get Your Walk On, Paparazzi, X, Alkaholic and What's The Difference, among other hits. There was also some of Xzibit's new stuff, including singles Up Out The Way and 1983 from his new album, Napalm. And, like he promised in an interview with KTW ahead of the show, there was also a tribute to the late Nate Dogg. For about 45 seconds in the middle of his one-hour set, Xzibit stood silent as acapella versions of some of Nate Dogg's most memorable hooks — "Smoke weed everyday" and "I've got hoes," to name a few — blasted over the CJ's sound system.

It was another memory-inducing part of a very memory-inducing show and, with a stupid grin on my face, I left the bar feeling like I had just spent a night driving my mom's Ford Windstar around Edmonton with my high-school buddies blaring Restless on the stereo — through the Discman cassette adaptor, of course.