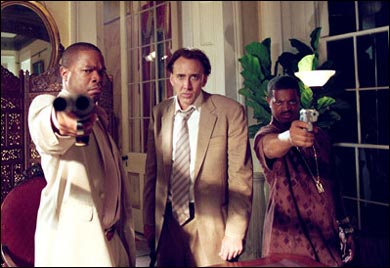 Xzibit is set to star in Bad Lieutenant: Port of Call New Orleans. The movie will be released in 2009 and will star Nicolas Cage, Val Kilmer, Eva Mendes and Fairuza Balk.

Bad Lieutenant: Port of Call New Orleans Synopsis: After severely injuring his back while saving a prisoner from drowning in the immediate aftermath of Hurricane Katrina, homicide detective Terence McDonagh (Nicolas Cage) is promoted to lieutenant, prescribed painkillers and returned to active duty.

A year later, he is addicted to both Vicodin and cocaine. But his responsibilities to the force continue, and when a family of African immigrants is found massacred, Terence is handed the case by his superiors. In the convoluted moral universe in which Terence lives, it’s possible to be a protective boyfriend to his escort girlfriend Frankie (Eva Mendes), look after a witness wanted by a notorious drug dealer (played by car-modifying rapper Xzibit), score drugs from intimidated club kids, regularly hallucinate about reptiles, have a lucky crack pipe and still somehow be charged with protecting the general public.